At the moment, white-white and a range of greys are people’s favorite colors, overwhelmingly, because cool neutrals work well on the flat panel doors of Modern design. But a shift to Traditional may not be far off.

A white that’s not so white.

As preferences evolve from the sharp lines of Modern to the more rounded look of Transitional—such as a Renway door style—the natural trend will be toward warmer whites. Also, toward warmer tones in metals, such as Vetro Champagne Bronze. 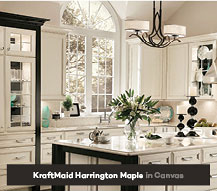 “A warmer palette suggests wood complements, specifically stains,”says Reep. “Stains add interest and texture when used with warmer whites—and of course, you can choose from a real variety of warmer white paints, from Canvas and Biscotti to Mushroom or Chai.”

Not everything from the era of Nixon, Ford and Carter still feels fresh today—but Transitional style does. And a nice example of bringing warmer whites and warmer tones in metals together to create Transitional style is demonstrated by the pairing of our new Shepparton Maple Door— shown here in Linen on the upper cabinets and Baltic on the lower cabinets—with brushed brass from our Mode Collection. “Younger homeowners just love the look of the seventies,” says Reep. “We’re seeing it in both kitchen and bath.”