The homeowners of this Rochester, N.Y., home requested a clean, simple look with a touch of rustic elegance.

Every client wants a renovated space with a unique look. When an original design has a dark and dated style, the goal is often not only to increase its function but also to give it individuality.

“The clients wanted a final product that was unique, timeless and bright in style and appearance that also provided them with the storage and functional characteristics of a well-planned space,” said designer Jennifer of Buffalo, N.Y., adding that these homeowners had a rustic aesthetic in mind.

From Typical to Timeless

The former kitchen was outdated, small and lacking in function, and it seemed that everything from the appliances to the cabinetry was not geared toward the homeowners. However, the home itself had plenty of architectural character.

“The biggest challenge in designing the space was coordinating all of the materials to work within the kitchen as well as with the rest of the house,” said Jennifer, who explained that she used 20–20 Design – Version 10.2 to redesign the space. “The home was renovated to be more of an open–concept plan, so the kitchen was open to the dining room and living room.”

To carry over the kitchen design to the living room, the team designed a white ceiling over the entire great room with several ceiling trays for added detail. The windows in the living space are also taller versions of those in the kitchen. The cabinets are a neutral, white Shaker style with more traditional curved hardware. Two sets of cabinetry on either side of the hood are glass fronted to keep a feeling of openness in the kitchen.

“The simple cabinets exude timeless character with elegance and sophistication,” said the designer, adding that beadboard was used on the ends of the cabinets to provide the touch of farmhouse chic the homeowner wanted. “Without being too fussy, the cabinets enhance the charm carried throughout the rest of the house.” 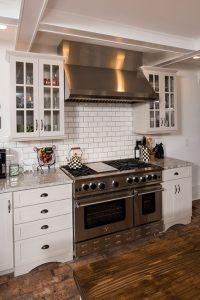 The 48-in. BlueStar range has two oven cavities, six burners and a griddle for large amounts of cooking and baking. The hood above the range is a high CFM unit, and the faucet is a professional style with numerous settings.

Beadboard was also used on the island, and according to Hutton, this particular piece is one of the most unique features in the room.

“The island boasts a custom–made wood island top and a large overhang for seating,” she added, explaining that the butcher block top is meant to bring a natural element to the room.

Large furniture-like legs anchor the unit to the floor and offer a ‘grounding’ factor for the kitchen. The island is large enough to seat three people without feeling too big for the space. In contrast to the rustic island design, the perimeter countertops are natural white granite with an abundance of character and movement.

Above the island, two pendants with clear glass shades and a unique shape allow light to flow in the kitchen. The clear glass also ties into the glass in the adjacent cabinets, which connects the room together. While the design team incorporated other forms of lighting, such as recessed and undercounter task lighting, these glass pendants were a specific request from the homeowner.

“Each client has a different lifestyle and different functional requirements for their kitchen, so it is always great to hone in on those requests and simultaneously produce a layout that works well for them,” said Jennifer.

“During the project, my favorite part was creating the design and assisting with cabinet function and layout,” said designer Jennifer.