Kitchens infuse a home with energy through food, conversation, and shared moments—and the design of your cooking space should reflect that. Whether you’re looking to incorporate a touch of elegance or some vibrancy into the room, a splash of paint or a brightly hued piece of furniture can work wonders. Get just as excited about the interiors as you do about a good meal with family and friends by discovering the right color for your kitchen. We’ve searched the AD archives for spaces with brilliant walls and furnishings that will give you the push you need to freshen up your own. From aqua-coated in New York to green monochrome in Martha’s Vineyard, these kitchens are proof that a little color goes a long way. 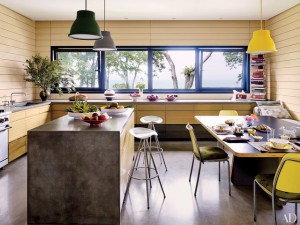 In designer Muriel Brandolini’s vibrant Hamptons beach house, the kitchen is equipped with cabinetry faced in colored wood veneer and concrete counters. The pendant lights are by Twentytwentyone, and the stools and corner bookcase are from Design Within Reach. 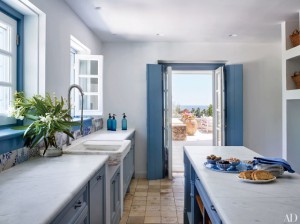 In a compound of Greek villas by designer Isabel López-Quesada, a kitchen’s French doors open onto the property’s main terrace. The countertops and sink are marble, the sink fittings are by Grohe, and the backsplash tiles are antique. Tiles custom made by Tile Guild based on Gio Ponti designs animate this David Netto–designed Southampton kitchen, which is appointed with pendant lights by Schoolhouse Electric & Supply Co., a hood custom made by RangeCraft, a Sub-Zero refrigerator, a Wolf range, and a pair of BassamFellows tractor stools from Design Within Reach. 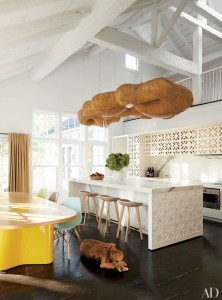 Bespoke cabinetry and a Campana Brothers suspension light enliven this Connecticut kitchen by India Mahdavi, where the owners’ golden retriever relaxes on the floor. The stools are by BassamFellows from Design Within Reach, the Eames side chairs are by Vitra, and the oven is by Miele. 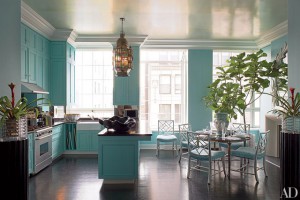 The walls and custom cabinetry in this New York kitchen were painted a vibrant aqua. Decorator Thomas Britt and architectural designer Peter Napolitano carried the color into the adjacent living room to maintain continuity. 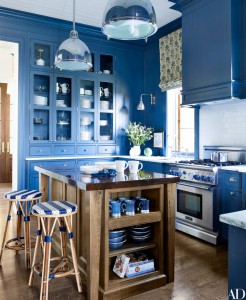 In Suzanne Kasler and Les Cole’s Maine vacation home, the poolhouse kitchen features Urban Archaeology pendant lights, a Thermador range, sink fittings by Michael S. Smith for Kallista, and counter stools from Walters; the Roman shade is made of a Jasper print, the backsplash is of Waterworks tile, and the walls are painted in a Benjamin Moore blue. 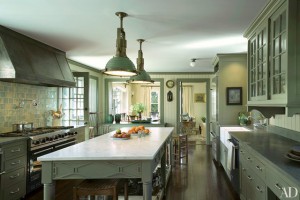 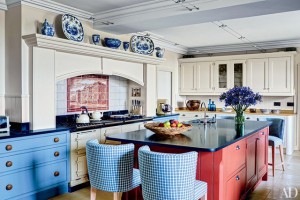 A residence inside this circa-1700 English manor features a kitchen outfitted with an Aga range and counter stools covered in a Pierre Frey fabric. Mark Gillette Interior Design gave the four-story apartment a grand but comfortable feel. 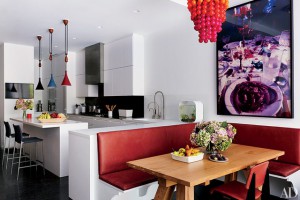 This Manhattan townhouse, which was renovated by Annabelle Selldorf and decorated with the help of Francis D’Haene of D’Apostrophe Design, is outfitted with vintage Swedish pendant lamps from R 20th Century, Boffi cabinetry, and a Gaggenau cooktop; the photograph is by Cindy Sherman. 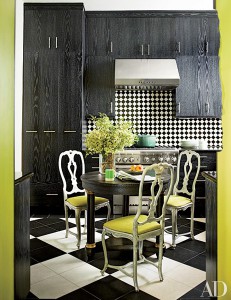 The kitchen of this antebellum house in New Orleans’s French Quarter is equipped with a Thermador range and hood and furnished with a table by Lars Bolander. 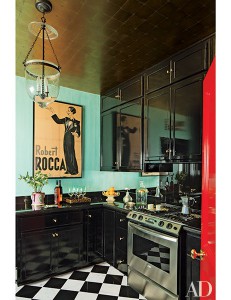 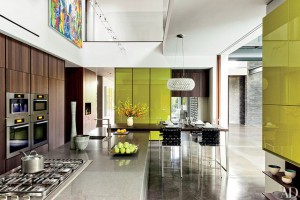 Varenna by Poliform lacquer and oak cabinetry enlivens the kitchen of this Beverly Hills home designed by Whipple Russell Architects and decorated by Tocha Project. 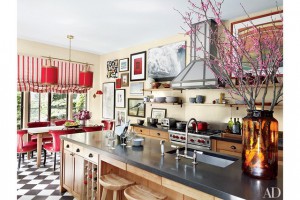 The kitchen of this Brooklyn family home, which was decorated by Nick Olsen, features an RH dining table surrounded by Soane Britain chairs clad in a Brentano faux leather. 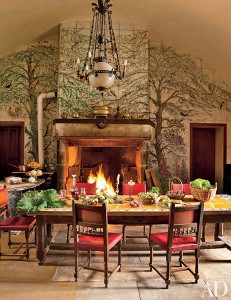 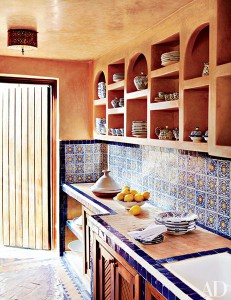 The rooftop kitchen of this home in Essaouira, Morocco, is decorated with antique tiles. 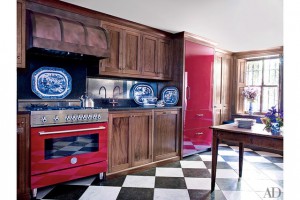 The kitchen of this Manhattan townhouse, which was renovated by Stephan Jaklitsch and decorated by Richard McGeehan, is outfitted with walnut cabinetry designed by Jaklitsch, and a mirrored backsplash. The Sub-Zero refrigerator has customized lacquer panels. 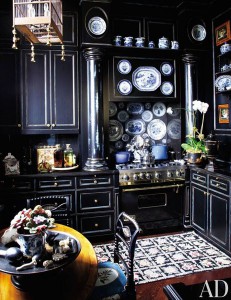 Friederike Kemp Biggs painted the kitchen cabinets in her New York penthouse with a rubbed finish of black over Chinese blue, limned in gold. 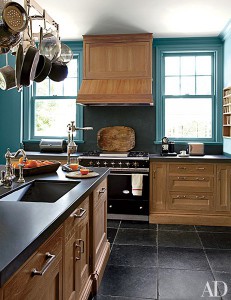 Paved with bluestone, the kitchen of this Miles Redd–decorated Connecticut residence features a Lacanche range, concrete counters, and an Elkay sink. 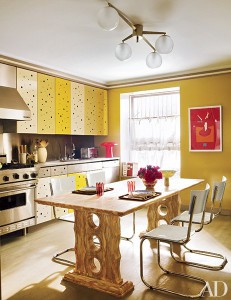 Czech chairs from the 1930s are grouped around a Jean Dunand marble table in the kitchen of interior designer Muriel Brandolini’s New York townhouse. The perforated cabinets were custom made by City Joinery; the range is by Viking. 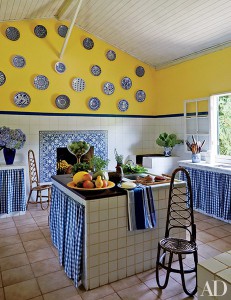 In the kitchen of this rustic family getaway outside Rio de Janeiro, blue-and-white ceramics enliven a wall; the tile around the fireplace is Portuguese, and the cabinets are curtained in a Colefax and Fowler check. 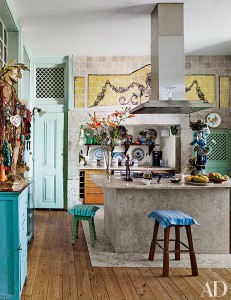 Keeping watch over decorator Pedro Espírito Santo’s Lisbon kitchen are a 17th-century statue of Saint Francis of Assisi and a 19th-century Italian porcelain figure; the decorative tiles are 18th-century azulejos. 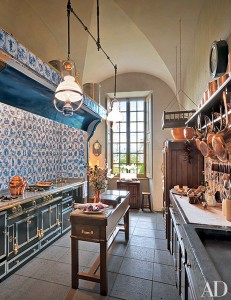 This 19th-century kitchen, with its period copper cookware and kerosene lamps, has been updated with a La Cornue range. The terra-cotta tiles were produced in Les Rairies in western France, and the floor is paved with six-inch-thick volcanic stone. The property, Château du Sailhant in central France, was restored by architect Joseph Pell Lombardi.