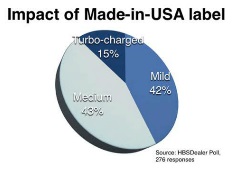 PERSPECTIVES ON PATRIOTISM, and

It’s a retail rallying cry, and it;s also a competitive point of differentiation. The “Made in USA” banner has long been the subject of surveys and analyses – often with conflicting conclusions.

Consumers will often say they want Made-in-USA products, but behavior changes when price enters the equation. Consider the recent AP-GfK poll that found 75% of American consumers would opts for a cheaper pair of pants over a more expensive American-made pair.

But the hardware and home-building industry has earned a reputation as American as apple pie – maybe it’s the proximity to Main Street and the American Dream of home ownership (and home maintenance.)

In HBSDealer’s most recent survey on the importance of Made-in-USA labeling, industry pros were asked to describe the impact of “made in USA” in the hardware and building supply industry.

Here are the results of 276 votes cast:

One of the speakers was Christian Herrick, CEO of Randy’s Hardware, who is bracing for a retail battle with a soon-to-open Walmart Superstore across the street from his Timberville, Virginia, location. In an interview with HBSDealer, Herrick made very clear that he would play the Made-in-USA card, and play it to the hilt.

“It’s everywhere,” Herrick said, about the support for Made in USA.

“I think all we’re doing is building awareness of the good products that are coming from America.”

“It starts with our marketing. In our print circulars, a majority of them have a callout that our products are made in the USA, and that we focus on Made-in-the-USA products.

“On social media we often talk about our focus on Made in USA. Our radio ads call out how focused we are on sourcing as many products as we possibly can. Then in the store, we have a sticker that goes on each product that says Made in the USA with a little USA flag. We communicate that visually.:

Price matters, but when observers point to price as the be-all and end-all, Herrick takes issue – whether they’re backed by studies or not.

“I would disagree with them. I was on a panel speaking to manufacturers in Tampa, Florida, this past December, and I told them the same thing. Our customers have specific SKUs that we have sourced domestically and imported. The domestic will be sometimes up to 50% more. But if they can see why, they lean toward that. It’s becoming more and more popular and more and more important.

“So, no, I would disagree with that research.”

It’s not just the small independents, however, who are appealing to customers’ patriotic leanings. Consider 84 Lumber, which last month rolled out “Operation Appreciation,” a plan to support the troops, support the military and continue its support for Homes for Our Troops.

Frank Cicero, COO of the Eighty Four, Pennsylvania-based pro dealer, explained that the initiative has support from the very top of the company, and for good reasons. CEO Maggie Hardy Magerko’s husband is a Marine Veteran. And founder Joe Hardy, Magerko’s father, was an Army engineer.

This recent operation echoes a 2013 initiative, called “Build America,” which emerged during a national conversation over home building with all-American products, which was spurred by a small builder who wanted to make a point about Made in USA products.

The Build America initiative is “still a big story,” Cicero said.”we get a tremendous amount of interest in it.”

He pointed to a Made-in-USA product analysis of two custom home builders supplies by 84 Lumber. In one case, a builder of about 45 homes per year ranging from $700,000 to $3.5 million in price, the level of Made-in-USA products account for 85% of the total material costs. In a second case, a builder of a subdivision of about 45 homes, the level of Made in USA was about 78%.

Sounds high? “we were really trying to get people to 95%,” Cicero said. “That would be high for me.”

The thing about Made in USA in the building industry is that builders have a head start in terms of the availability of domestic products.

“If you get the lumber right, you have a big percentage of it,” Cicero said . “I think all we’re doing is building awareness of the good products that are coming from America.”

Building materials, such as I-Joists, windows made in America, domestic cabinets and gypsum from West Virginia, can make up the bulk of a project.

“The nails are a difficult thing, and the other is light fixtures,” he said. “Often times, in high-end kitchens, their granite has to come from some far-away place.”

Looking ahead, 84 Lumber plans to continue to press the issue, partly because the company believes the cause is just, and partly because the market is receptive to the Made-in-USA concept. “We see it,” Cicero said. “we know our builders are doing it. It’s just trying to get more ways to get the percentage higher, and trying to figure out a way to really show more customers that that’s what they’re doing.

“I think we’ll keep working on it.Rome wasn’t built in a day.” 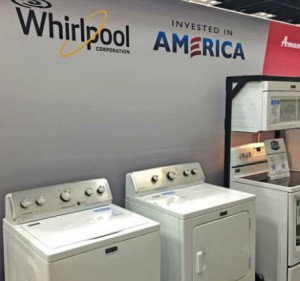 Whirlpool is “invested” in America, by bringing jobs back to the U.S. 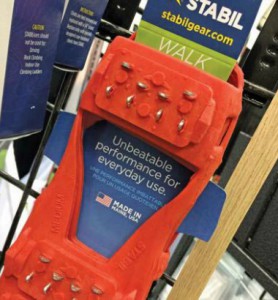 Made in Maine, Stabil slips over shoes to prevent slips in the great outdoors. Cashel’s utility sink is a new entrant in the Made-in-USA arena.

Article as seen in HBSDealer Magazine